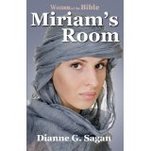 John Mark, the son of Miriam and Ezra, is a young Jewish boy growing up in Roman occupied Jerusalem. His lust for adventure and hatred of the occupying forces are a growing concern for his parents. His father, a wealthy merchant, tries to solve the problem by taking him along on his trading journeys. When Ezra sickens and dies, Miriam is left alone to raise her headstrong son.
What follows is a story of a parent’s attempts to do what she thinks is best for her son.
Just when Miriam is nearing her breaking point, she meets the rabbi from Nazareth and both her and John Mark’s lives are changed forever.
This story sheds a lot of light on the culture of the day and the oppression of the Jews by the Romans and as such is well worth reading. It is apparent that Ms. Sagan has done a great deal of research. The story is simply and well told.
If I were a fan of fictionalized Biblical history, I would have enjoyed this book more. Please don’t misunderstand. There is nothing contrary to Scripture in it but neither is there anything in Scripture to support most of the story. I suppose Biblical characters had a life and, based on the research that went into this story it is plausible. So if you’re a fan of this type of story, you will enjoy it.